Discoveries:  See Minor Planet Discovery Sites and Summary of PHA and NEA Discoveries by Discoverers which provide the numbers of discoveries by the various observatories in total and year-by-year.  SPACEWATCH®'s observatory codes used by the Minor Planet Center are"291" and "691".  Discoveries of NEOs by SPACEWATCH® peaked in the mid-1990s, before shifting priority to following up already-known NEOs to prevent them from becoming lost.

Virtual Impactors: We give NEOs listed by JPL or the Near-Earth Object Dynamics Site (NEODyS) with potential impact solutions the highest priority. Objects are retired from those lists when there are sufficient observations to rule out impact trajectories. SPACEWATCH® observations have contributed to the retirement of half of all the objects that have been so retired.

MPC’s NEO Confirmation Page (NEOCP): Freshly discovered objects, especially those discovered by surveys that cannot do their own follow-up, receive priority
on each night of observing.

Potentially Hazardous Asteroids: To focus on the Congressional Mandate cited for NASA's Near-Earth Object Observation (NEOO) Program, we also observe PHAs as defined by the International Astronomical Union (IAU). Those are NEOs with absolute V magnitudes “H” brighter or equal to 22 and whose orbits approach within 0.05 AU of the Earth’s orbit. See our tally of observations of PHAs: 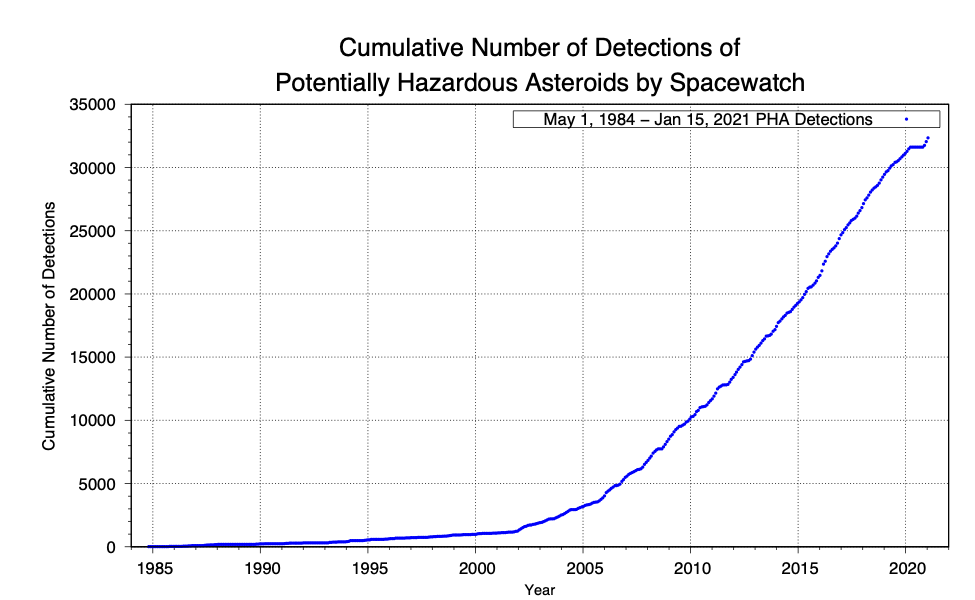 Radar Targets: We routinely monitor the web sites of the Goldstone and Arecibo Observatories for requests for astrometry of their future asteroid targets. Radar
can provide a wealth of accurate and unique information about asteroids, but their positions on the sky need to be known to within about 20 arcseconds. Astrometry prior to radar campaigns is sometimes needed to improve knowledge of orbits. Per year we observe about 35 radar targets.

NEOs Measured in the Infrared by the NEOWISE or Spitzer Spacecraft: The relationships between the mineralogical properties and orbits of asteroids are clues to their origins and subsequent processing. But albedos are generally difficult to determine in visible light. The Wide-field Infrared Survey Explorer (WISE; later NEOWISE, Wright et al. 2010) has determined diameters and albedos of several hundred NEOs (Mainzer et al. 2011a, b, 2012a,b, Nugent et al. 2015). After such hard-won physical parameters are determined, it is important that those objects be recoverable for further study. We observe about 50 such objects per year.

Potential Destinations of Spacecraft: NASA's NEOO Program wants astrometry of NEOs as potential rendezvous destinations for spacecraft. The orbital criteria for mission feasibility are low inclination with respect to the ecliptic, low eccentricity, and semimajor axis near 1 AU, to minimize the velocity impulse required for transfer and rendezvous. The necessary long-range planning for a space mission requires much more accurate orbital elements than have been typical for NEOs.  SPACEWATCH® observes an average of 100 potential rendezvous targets per year.