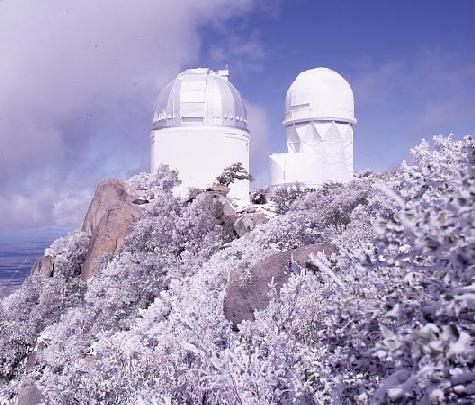 The Spacewatch® 0.9-m telescope (left) on beautiful Kitt Peak during the winter.
(Photograph by Jim Scotti)

Spacewatch® personnel run the Steward Observatory 0.9-meter telescope, the oldest on Kitt Peak. It was installed in 1923 on the University of Arizona campus and houses the first large telescope mirror successfully cast in the United States. The telescope was then moved to Kitt Peak in 1962. In 1969, it was used to discover the first optical pulsar. By the year 1982 the telescope had fallen into disuse, so the Director of the Steward Observatory granted the Spacewatch® Project exclusive access to the telescope on the condition that Spacewatch® take on all the tasks of refurbishing the telescope and performing all maintenance. Spacewatch® rose to this challenge, developed an electronic imaging detector system, and made the first trial scans with a small CCD in May 1983.

On this telescope, Spacewatch® developed the technique of scanning the sky with a charge-coupled device (CCD), and has been using it to survey for asteroids and comets since 1984. In October of 2002 the conversion to a mosaic of CCDs was completed and a new primary mirror was installed. See the Photo Gallery of the conversion.

After visiting the Spacewatch® facilities on Kitt Peak in 2012, Dr. Roger Carpenter, MD (ret.) provided us with images of the 36 inch telescope during construction (PPT) and in its dome on the University of Arizona campus taken by his father Prof. Edwin Carpenter, in the 1920s and 1930s. Also included are a few images taken by himself during his visit to Spacewatch® showing the 36 inch in its present configuration in its dome on Kitt Peak.

* All Spacewatch® observations have been and will continue to be made through a Schott OG 515 filter. The filter greatly simplified lens design for the broad (0.5-1.0 micron) bandpass because it allowed us to avoid an atmospheric dispersion compensator, a difficult proposition at these fast f/numbers, and allows us to use flint elements in the lens prescription. It also reduces moonlit sky background. 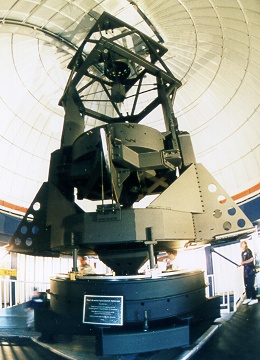 The 1.8-m Spacewatch® telescope in its upright position.
(Photograph by Alain Maury)

Astrometric observations with this telescope began part time in March 2001. The first astrometry with this telescope reported to the MPC was made on 2001 April 13-18, and extended observing runs began in 2001 September. On 2001 April 21, the first astrometry with this telescope to be listed in an MPEC was made of the EA 2001 HW7. On 2001 May 24, the first astrometric recovery of a faint (V=22.6) EA was made with the 1.8-meter Spacewatch® telescope; this also appeared in an MPEC. The object was 2001 HB, a Potentially Hazardous Asteroid (PHA), recovery of which was urgently requested by the Spaceguard Central Node. The first EAs discovered with the Spacewatch® 1.8-m telescope were 2001 UO and 2001 UB5 on 2001 October 16 and 18, respectively. The unusually faint PHA 2001 SB170 was recovered at considerable effort with the 1.8-m telescope on 2001 Oct. 13 at V magnitude 23.3 at the urgent request of Spaceguard, resulting in the elimination of some predictions of future collisions of this object with the Earth.  Update on 2021 Nov. 7: R magnitude 23.7 was reached with this telescope to recover Virtual Impactor 2021 UK2.  This corresponds to a V magnitude of 24, showing what this telescope can do when the observing conditions allow.

With the 1.8-m telescope we put high priority on objects fainter than V=20.5 magnitude because they are less likely to be observed by other stations. Potentially Hazardous Asteroids (PHAs), Virtual Impactors (VIs) as defined by the JPL NEO Office, faint objects on the Minor Planet Center's Confirmation Page, fast-moving objects (FMOs), and objects originally discovered by Spacewatch® receive priority for recovery and followup with the Spacewatch® 1.8-meter telescope.

Routine scheduling of 20 nights per month began on 2001 Oct. 8, operation of the telescope by solo observers was achieved on 2001 October 16, and improvements to the efficiency of operation of the telescope are continuing. As of 2002 Nov. 22, about 52,456 detections of asteroids had been made with the 1.8-m telescope, where one detection usually equals three observations of position. Astrometry with the 1.8-m has yielded 1,939 object designations and 958 positional measurements of 181 NEOs, including 14 NEOs discovered with the 1.8-m telescope.

The mechanical design of the tube truss by Barr is optimized by finite-element analysis to provide high resonant frequencies.  The mount is an altitude-azimuth type for compatibility with the mirror support cell contributed by the Multi-Mirror Telescope Observatory.  Both axes are driven by DC servo motors directly coupled to friction rollers.  The CCD instrument stage is also rotated under computer control.  The telescope was fabricated in the University Research Instrumentation Center (URIC).

The optical configuration is f/2.7 folded prime focus with a flat secondary that locates the focal plane in the center of the optical truss near the altitude axis.  This shortened the telescope enough to make the dome building affordable, and the flat secondary preserves the fast f/number of the primary mirror.  The coma corrector designed by R. A. Buchroeder is a modified Klee design of 5 spherical lens elements plus a filter transmitting longward of the B bandpass.  The filter greatly simplifies lens design and reduces sky background while not significantly reducing the peak-pixel brightness of asteroids.  The distortion-free, flat, unvignetted field of view is 0.8 deg in diameter and the effective corrected focal length is 4955 mm.

All Spacewatch® observations have been and will continue to be made through a Schott OG 515 filter. The filter greatly simplified lens
design for the broad (0.5-1.0 micron) bandpass because it allowed us to avoid an atmospheric dispersion compensator, a difficult
proposition at these fast f/numbers, and allows us to use flint elements in the lens prescription.  It also reduces moonlit sky
background, being a "minus-blue" (i. e., yellow-orange) color.

More Pictures of the 1.8-meter: 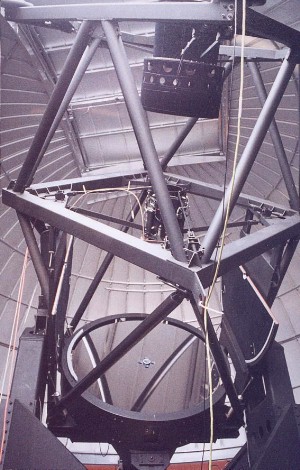 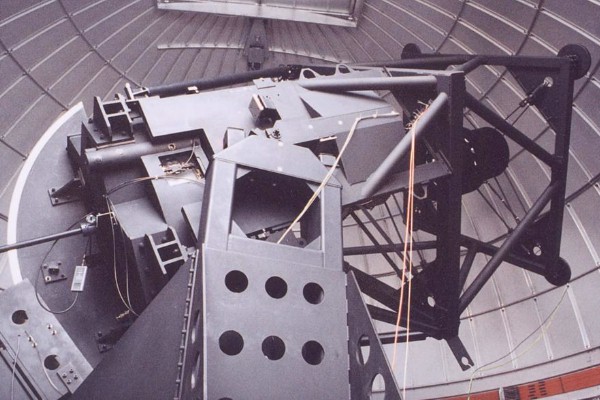 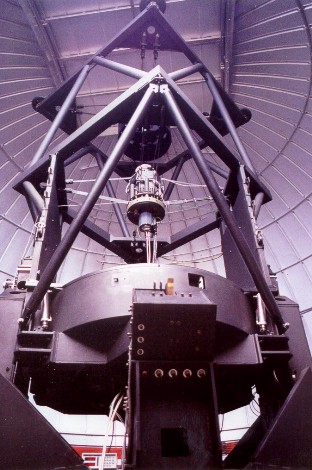 The first picture shows the 1.8-meter diameter primary mirror. The next two pictures show the telescope from various positions in engineering mode. There are various cables and ropes hanging from the telescope that will not be present when operational. Finally, the rightmost picture shows the secondary mirror assembly (left) and instrument stage (right) suspended in the air.

Progress With the 1.8-meter Telescope:

Spacewatch® acquired focused starlight with the 1.8-meter telescope on a ground glass slide.

The pole star (Polaris) was found and positively identified. About six other stars were acquired, moving progressively further away from the pole until the objects couldn't be found.

A Panasonic low-light video camera was used to capture images of the very fast moving object (VFMO), 2000 RD53, through the 1.8-meter. Integration time is approximately 0.5 seconds per frame, thus there are very few stars in the field. The movie clips below are sped up 100x. The speed of the GIF animations will vary with the speed of your computer and internet connection. The images are blurry because the telescope does not yet have the coma corrector installed. This was an engineering run, not real science data.

Note: GIF animations will display in your browser. MPG movies require an external player such as Microsoft's Windows Media Player.

Rotation stage working, plus focus, tip & tilt. Videotaped focusing on a cluster, and then replaced the video camera with an SBIG ST-6 cooled digital CCD camera. We got some star fields and saved the images.

With the cooled digital ST-6 CCD camera at prime focus, we determined the zero point of the instrument rotator parallactic angle and acquired every object we pointed at without searching. We observed some Landolt photometric standards as well.

The high point of tonight was our acquisition of the very fast moving NEO 2000 RD53. We recorded several images showing its trail, thereby simultaneously achieving for the 1.8-meter telescope the:

We made a two hour series of photometric measurements of the VFMO 2000 RD53.
The sequence of images below shows the asteroid's movement among the background stars. 2000 RD53 appears in the left portion of each frame, moving towards the right. Its motion is fast enough to cause the image to streak during the 30 second exposures. The three images were taken about 2 minutes apart.

Last night we made the most interesting observations with the 1.8-m telescope yet. The drive software is now capable of tracking on a fast moving asteroid (2000 SM10), and we got more than 3 hours of measurements of its apparent magnitude.

2001 January 24 - Successful test of the whole optical system of the 1.8-m telescope, including the 6-element coma corrector lens system.

Previous observations with this telescope were made at prime focus, without the lenses that are needed to correct for the coma that is a property of any parabolic primary mirror. The coma corrector is designed to give good images over the full 0.8 degree wide field of view. To evaluate the images over this wide field using the small SBIG ST-6 CCD, we positioned the detector at 5 positions: on axis, and 4 positions corresponding to the corners of our bigger science detector that we plan to install soon. Each image is 4.4' x 5.8' across with an exposure time of 10 seconds through a Schott OG-515 filter. The seeing was reported independently by Jeff Larsen on the 0.9-m telescope to be 1".6 - 1".8 arcsec that night.

The images we took of the open cluster Chi Persei are seeing-limited both on and off axis, showing that the optical design as well as the lens fabrication and the collimation of the whole system have been successful.

(Note: image positioning not to scale.)

The small CCD has been replaced by an engineering grade 2K x 2K SITe CCD with an experimental mode readout system. This system was tested on star fields and the collimation and focus were found to be good.

First asteroid astrometry with 1.8-meter telescope submitted to and accepted by the IAU's Minor Planet Center. The telescope has been assigned IAU Observatory Code 291.

Engineering continues on the CCD readout system, software, and the telescope drives.

2001 May 24 - First recovery of a Potentially Hazardous Asteroid with the 1.8-m telescope:

MPEC 2001-K33 This object was very faint, out of reach of the 0.9-m Spacewatch® telescope as well as many others.

First night of operation by a solo observer (Dr. Jeffrey A. Larsen), and the most productive night to date with this telescope, yielding 5 full survey scans, four recoveries of Earth-approaching asteroids, and a discovery of a fast moving Earth-approacher.

2011 Oct 10:  We replaced the 1992-vintage imaging CCD detector on our 1.8-meter telescope with a thinned, back-illuminated, antireflection-coated CCD of 2048x2048 pixels cooled thermoelectrically with circulating antifreeze fluid as a heat sink. The smaller pixels of 0.6 arcsec as projected on the sky, and the superior flatness of the new CCD immediately yielded astrometry a factor of two more precise than before. Faster readout also allows more observations per night by use of “staring” exposures at the sidereal rate rather than the drift scanning that the slowly reading CCDs of the early 1990s required. The thermoelectric cooling system brings the detector down to operating temperature in tens of minutes, compared to the 8 4hours it took to cool down the old detector. This allows us to become operational more quickly after electrical storms clear.