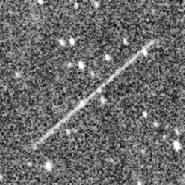 The first FMO found and successfully tracked by Spacewatch® was 1991 BA, a small 5 to 10 meter object moving at about 20 degrees per day, detected on the night of 1991 January 18 UT by David Rabinowitz (1). It was found at the time of the Gulf War and Scud missile attacks were on David's thoughts that night when he contacted Spacewatcher Jim Scotti around 10 PM. After some discussion, David was able to get a second image of the object about an hour later and then continued the followup until the object was too low in the sky, about 4.5 hours after discovery.

The discovery of this object was very significant. First, it gave us a direct detection of an object of the size we might expect to see actually hit Earth in a human lifetime. Second, its discovery suggested a much higher impact rate and also a much larger population of this sized object than was anticipated based on discoveries of larger asteroids. The discovery of the 2nd and 3rd VFMOs in October 1991 confirmed the high impact rate and suggested about a factor of 40 enhancement in the number of small meteoroids compared to expectations (2,3). Since 1991, spacecraft images taken during asteroid flybys show a high density of craters on the surface of large asteroids (craters are formed by collisions with smaller objects.) The crater density seems to confirm the higher population of small meteoroids. (4).

Spacewatch®'s VFMOs were detected by the observer as he or she watched the images of the night sky scroll by on the computer screen (5). Rabinowitz attempted to create an efficient trail detection algorithm, but the best detection software could only find relatively bright trails while the visual examination of images were able to detect very faint trails far below the detection threshold of the software. Since FMOs are rare objects, it has been the approach of Spacewatch® to continue to identify them by visual inspection of image data rather than making a second attempt at developing software for the purpose.